Did you find this document helpful?

Would you like to provide more feedback on this document?

For example, you can assign a cPanel account’s mail functionality to a secondary server (child node) optimized for mail. As a result, your primary node’s resource usage is lower. This helps optimize the user experience for non-mail services, such as web hosting.

One way you can optimize your child nodes is to set a server profile. To do this, you can configure a node’s profile directly in WHM’s Server Profile interface (WHM >> Home >> Server Configuration >> Server Profile).

The parent node in a linked node configuration only uses a Standard Node profile. A parent node cannot use any other server profile.

For information about server profiles, read our How to Use Server Profiles documentation.

Linking nodes together creates a “parent and child” node configuration. For example: 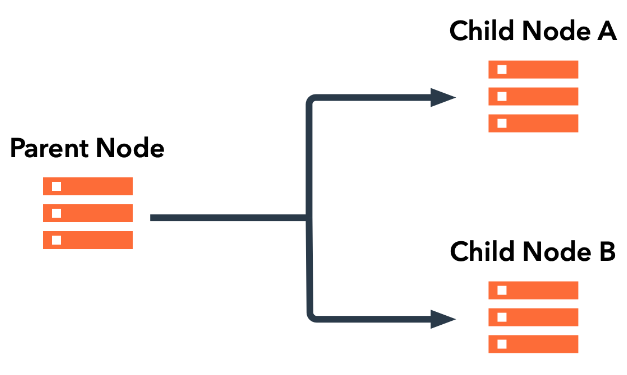 The following restrictions apply for child nodes on a linked node configuration:

Distributed accounts have the same level of access on the child node as they do on the parent node. This access allows linked nodes to work smoothly with existing systems. For example, we disable the Pipe to a Program option in cPanel’s Forwarders interface (cPanel >> Home >> Email >> Forwarders). We do not support email forwarders that execute programs. Users can still manually create these forwarders. However, we will not preserve this functionality in future versions.

We are researching methods to transition to a reduced access security model in a future version.

A cPanel account that offloads specific functions (such as mail) to a child node is called a distributed cPanel account. This basic process consists of the following steps:

To distribute an existing account, use the Linked Nodes section in WHM’s Modify an Account interface (WHM >> Home >> Account Functions >> Modify an Account). The system will create the modified account on the child node as part of this process and offload the desired functionality to the child node’s version of the account.

In most cases, all IMAP, POP3, and SMTP traffic for distributed cPanel accounts goes to the child mail node. However, if this traffic arrives at the parent node (for example, cached DNS lookups), the parent node will:

Only system administrators can perform these actions.

You can manage your distributed cPanel accounts using one of the following methods:

The process of moving some or all a distributed cPanel account’s functionality from a child node back to the parent node is called “dedistribution.” As part of this process, the system does not remove the account or the account’s data from the child node.

In some cases, you may need to forcefully dedistribute an account. For example, a child node is permanently offline or a child node’s security is compromised. You can use WHM’s Link Server Nodes interface (WHM >> Home >> Server Configuration >> Link Server Nodes) to perform this action. However, performing this action will result in account data loss.

When using linked nodes, there are some things to consider for distributed cPanel account passwords: